Has Andrew Lavali Seen The Light? 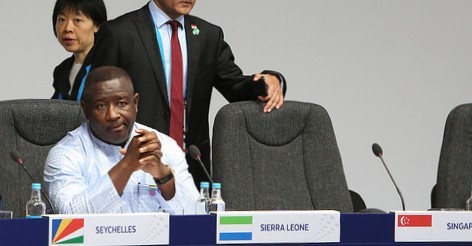 By Mohamed Sankoh (One Drop)

Andrew Lavali is one of those Civil Society activists who have been using phony surveys to infer that it is only the ruling Sierra Leone People's Party (SLPP) which can single-handedly build the economy of Sierra Leone because it has in its fold super-economists like Jacob Jusu Saffa the Minister of Finance and Professor Kelfala Kallon the Governor of the Bank of Sierra Leone who are, in their tribalised telescope, better than Adam Smith with his seminal "The Wealth of Nations".

That has always been one of the very reasons behind the indefatigable surveys which Andrew Lavali's Institute for Governance Reform (IGR) has been churning out with the frequencies with which Mr Lavali inhales air. He and all his ilk appear to have been sexing-up data to come up with misrepresented surveys just to justify their SLPP's policies!

But with the Afrobarometer 2020 Study, Andrew Lavali has suddenly realized that all along he has been hiding in a fog. Now that the fog has cleared, even some of his peers are now seeing him like the fabled baboon in Ayi Kwei Armah's "The Beautyful Ones Are Not Yet Born" who, while climbing higher to defecate on the people's faces, doesn't know that the people have seen its bottom and have turned their faces in disguised laughter!

I'm still shocked at a 20 August 2020 post on Andrew Lavali's Facebook page. I think I should quote it in full for its striking restrained irony. Here we go: "Disturbing! 64% say Sierra Leone is now heading in the wrong direction….Changing this story starts with uniting to confront our common enemies—poverty and division. No one [political] party can build this economy, not even a high growth in GDP figures. We have to be each other's keeper."
For such words to have come, or coming, from a "pure and applied" unadulterated pro-SLPP supporter like Andrew Lavali has the equivalency of Saul (later baptised as Paul), the once chief prosecutor of Christians, being converted to Christianity after he was struck by "a light from heaven" on his way to Damascus. Why is it only now that Mr Lavali is realising that all Sierra Leoneans need to be "each other's keeper" before we, as a nation, "can build [the] economy"? Why is it only now that Mr Lavali is coming to terms with the fact that his SLPP's "New Direction" has taken, and still taking, Sierra Leone to the wrong direction in terms of economic growth and national cohesion?

Where was Andrew Lavali when his SLPP government was sacking, in droves, citizens perceived to be supporters of the All People's Congress (APC) and systematically recruiting SLPP supporters in all state institutions? Where was Mr Lavali when his SLPP Commission of Inquiries were letting off-the-hook SLPP supporters, who were known accomplices to state plunder, and only prosecuting APC stalwarts who were just allegedly as guilty as those SLPP supporters? And where was Mr Lavali when the killings at Tonko Limba; Mile-91; Lunsar; Tombo; Pademba Road Correctional Centre, and Makeni were all taking place? Dear reader, I will tell you where he was. He was at his Wilkinson Road IGR offices doctoring data to fit into his SLPP schema! Has Andrew Lavali, or his pro-SLPP IGR, ever asked for an inquest, or inquests, into those killings?

But for the very first time in over two years, the Afrobarometer 2020 Study has de-fogged the fog in which Andrew Lavali has been hiding all along. According to this Study, "Sierra Leoneans are overwhelmingly dissatisfied with their personal living conditions and the country's economy, and very few citizens believe the government is doing a good job of handling the economy.

Dissatisfaction with the country's economy and personal living conditions is reflective of citizens' increasing levels of deprivation in their everyday lives, as large majorities experience shortages of food, clean water, and other basic necessities. Citizens in the opposition-controlled Western and Northern regions are especially bleak in their outlook…" How can their outlook not be bleak when they have been unnecessarily targeted by Mr Lavali's own SLPP government which seems to be implementing a sort of supremacist policy? How can majority of Sierra Leoneans not be dissatisfied with their country's economy when the Minister of Finance and the Bank Governor appear to be behaving like bulls in a china shop?

Over two years now, it has always appeared as if the IGR surveys are commissioned by the SLPP which is why they have been painting rosy pictures of Sierra Leone under the SLPP government. So I'm surprised that Andrew Lavali is surprised that, "only one-third of Sierra Leoneans say the country is going in the right direction, a significant decline after some optimism with the change in government in 2018…" And that, "negative assessments [of the SLPP government] have almost doubled… [as the] government receives lower approval ratings on its economic performance than on other issues…"

Back to Andrew Lavali's Facebook page post of 20 August 2020. Indeed, it is "disturbing" for him that even though he has been trying his very best to present his SLPP as the panacea for Sierra Leone's economic woes; "64% say Sierra Leone is now heading in the wrong direction ". Hidden truths always have their own way of transforming themselves into Freudian slips! Truth is like smoke; no matter what is used to shroud it, it has a way of showing itself for all to see.

But if Andrew Lavali has really seen the light like Saul, then I will now take comfort in the fact that he will soon become an acolyte of realistic surveys. And I'm cautiously optimistic that he will never go back to his old ways and be the hidden pulse of the SLPP government. After all, after the incident on the Road To Damascus Saul (now known by his baptismal name—Paul) later ended up writing majority of the Books in the Bible ("of the 27 books in the New Testament, 13 or 14 are traditionally attributed to Paul"). It is never too late for Andrew Lavali to become a proselyte.

It is on that note that I will end today's One Dropian dropping with a Persian proverb that says, "The man who speaks the truth is always at ease." I only hope that Andrew Lavali might begin to be at peace with himself now that he seems to have seen the light on the Road To Damascus (which, in literal translation, is the Afrobarometer 2020 Study).

This email address is being protected from spambots. You need JavaScript enabled to view it. Tel:+232-76-611-986